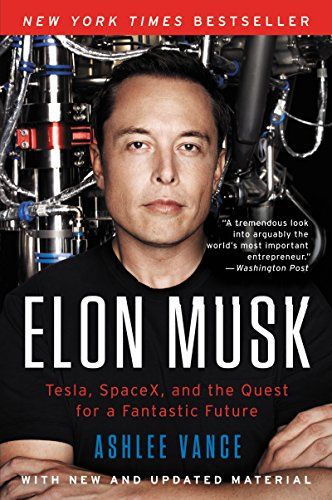 I watched a one hour long documentary about Elon Musk on Youtube about a year ago so I was hesitant in buying the book. After finishing this book, I concluded that it must now be in my top 5 must reads right alongside Can't Hurt Me by David Goggins. You hear about Musk's work ethic, success and passion through the news all the time. But in his biography you get to dig much deeper and see his flaws, extreme perseverance and genius in such close detail. I was in awe, and couldn't put the book down and ended up finishing it in three days.

Ashlee Vance the author of the book spent many occasions talking to Elon about his life in order to write this book, so it isn't some third hand account of things anyone can find online.

Interesting points during college that point to future success:

Vance then goes into talking about Elon's creation and involvement with Zip2 and Paypal. He then talks about how SpaceX and Tesla were started which interestingly enough were both not Elon's own ideas. This was surprising to me because I always had the preconception that these companies were things Elon wanted to start since entering college.

Throughout these startup stories, you see Elon's lowest points and wonder how a man can handle so much stress at once. Running one company is enough to drive the majority of people crazy but successfully running two makes you understand why people call him the real life Iron Man.

I also noticed that Musk is a sponge when it came to absorbing knowledge. For example while creating X.com his finance startup he read books on the banking industry to learn its inner workings. He applied to same technique when trying to understand how rockets or car engines worked.

The creation of SpaceX was particularly interesting because he created the startup after being kicked out of Paypal which he was planning to stay at for the long-term and was denied by Russians for rocket parts. If either of these failures had not happened SpaceX might not have happened.

Although you are greeted by Musk's brilliance throughout the book, you also come to learn of the brilliant people that contributed to Elon's success. These people I believe do not get the credit they deserve for the creation of Tesla and SpaceX.

The book was extremely motivational, and I recommend it to anyone no matter what their profession or goals are in life.

Warning -> This book will make you want to purchase a Tesla. The book really gets you to understand how incredible of a car the Model S really is.

"What Musk has developed that so many entrepreneurs in Silicon Valley lack is a meaningful worldview" .

"It was not unusual for him to read ten hours a day", said Kimbal. Elon, had in fact, churned through two sets of encyclopedias".

"Honestly, there were no signs that he was going to be a billionaire He was never in a leadership position at school said Giedon Fourie a classmate of Elons"

"If there was a way that I could not eat, so I could work more, I would not eat" -Elon

"When Elon gets into something, he develops just this different level of interest in it than other people. That is what differentiates Elon from the rest of humanity"

"He wasn't just sniffing out trends, and he wasn't consumed by the idea of getting rich. "He's been in the pursuit of a master plan all along."

"Starting Zip2 and watching it grow imbued Musk with self-confidence"

"Money is not his motivation, and, quite frankly, I think it just happens for him, Justine said. It's just there. He knows he can generate it"

"Musk had reverted to his childhood state as a devourer of information and had emerged from this meditative process with the realization that rockets could and should be made much cheaper than the Russians were offering."

"Elon had pretty good patience...What Musk would not tolerate were excuses or the lack of a clear plan of attact"

"When Hollman visited the doctor, he discovered that Musk had already agreed to pay for the surgery. "Elon can be very demanding, but he'll make sure the obstacles in your way are removed""

"He (Elon) always communicated the importance of being lean and of success, but it was never 'if we fail, we're done for'. He was very optimistic."

"instead of doing the fashionable Silicon Valley thing of "pivoting" toward a new idea or plan, Musk would dig in deeper."

"If you put a number on the projector that does not make sense, he will spot it. He (Elon) doesn't miss details".

"He (Elon) has to understand that you're as crazy as he is. This ethos filtered through the entire company, and everyone quickly understood Musk meant business".

This was during the time where both Tesla and SpaceX were on the very brink of bankruptcy.

"He has the ability to work harder and endure more stress than anyone I've ever met" Gracias said. What he went through in 2008 would have broken anyone else. He didn't just survive. He kept working and stayed focused. The harder it get the better he gets."

"He interviewed almost every one of spaceX's first one thousand hires, including the janitors and technicians, and has continued to interview the engineers as the company's workforce swelled."

"Musk managed to conjure up that Steve Jobs like zeal among his troops. 'His vision is so clear,' Singh said."

"I thought at first that he was challenging me to see if I knew my stuff, said Kevin Brogan, one of the early engineers. 'Then i realized he was trying to learn things. He. would quiz you until he learned ninety percent of what you know."

"One of my favorite things about Elon is his ability to make enormous decisions very quickly". quickly."

"Like Steve Jobs before him, Musk is able to think up things that consumers did not even know they wanted-the door handles, the giant touch-screen"

The Unified Field Theory of Musk -> "Each one of his businesses is interconnected in the short term and the long term. Tesla makes battery packs that SolarCity can then sell to end customers. SolarCity supplies Tesla's charging stations with solar panels, helping tTesla to provide free recharging to its drivers. Newly minted model S owners regularly opt to begin living the Musk Lifestyle and outfit their homes with solar panels."

"Musk speaks about the cars, solar panels, and batteries with such passion that it's easy to forget they are more or less sideline projects."

"I've learned that your intuition about things you don't know bout isn't very good, Page said. The way Elon talks about this is that you always need to start with the first principles of a problem. What are the physics of it? How much time will it take? How much will it cost? How much cheaper can I make it?"

"Suffering, though, has always been Musk's thing. The kids at school tortured him. His father played brutal mind games. Musk then abused himself by working inhumane hours and forever pushing his businesses to the edge".