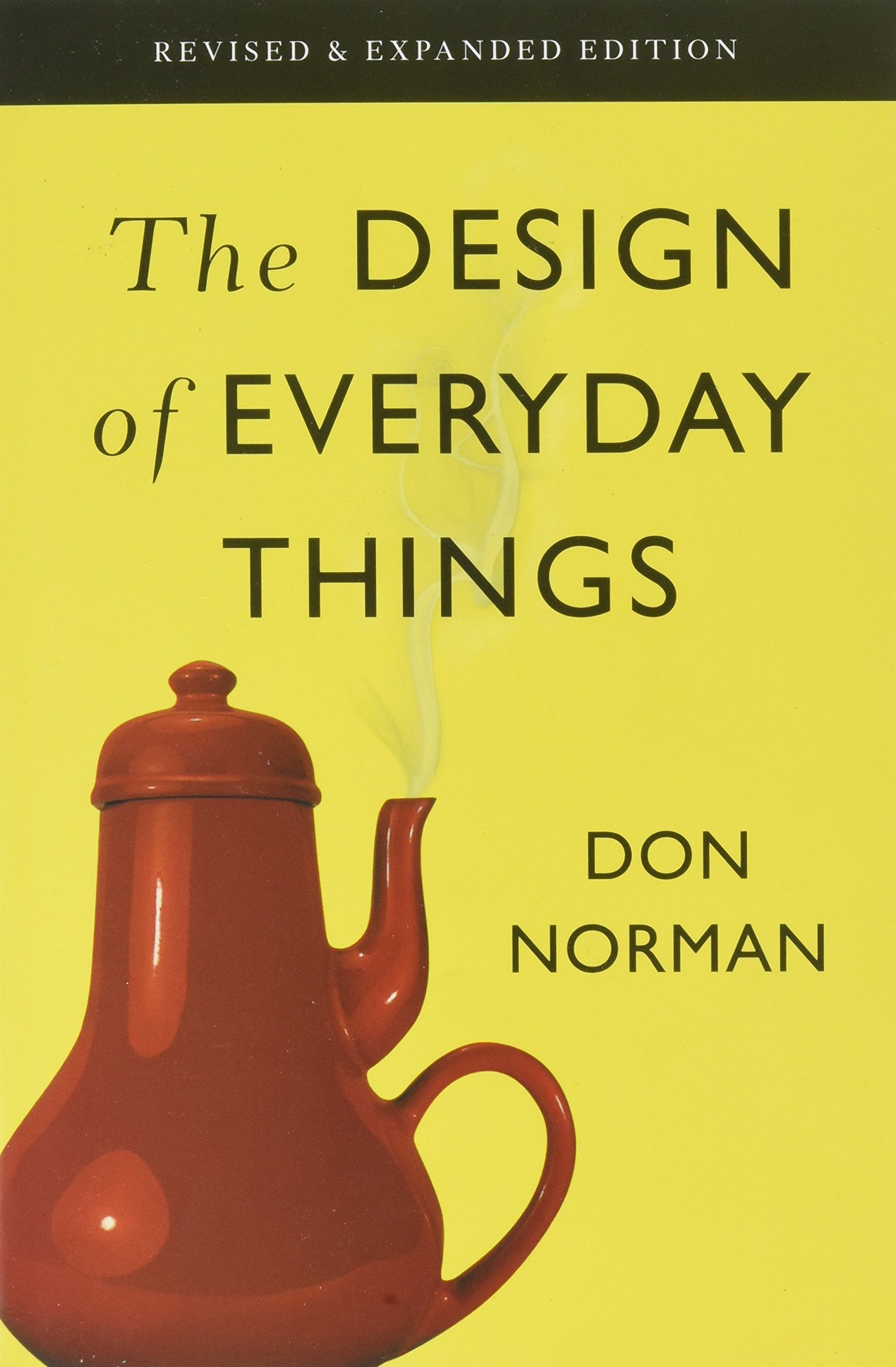 Very interesting book, the main lesson I got from it was that design is very similar to engineering where there is constant iteration based on user feedback. This is a must-read for all designers but also for marketers, engineers, or any one part of the process of selling or building a product.

The Design of Everyday Things Summary

Engineers are trained to think logically. As a result, they come to believe that all people must think this way, and they design their machines accordingly.

Knobs afford turning, pushing, and pulling. Slots are for inserting things into. Balls are for throwing or bouncing. Perceived affordances help people figure out what actions are possible without the need for labels or instructions. I call the signaling component of affordances signifiers.

Affordances represent the possibilities in the world for how an agent (a person, animal, or machine) can interact with something. Some affordances are perceivable, others are invisible.

Poor feedback can be worse than no feedback at all, because it is distracting, uninformative, and in many cases irritating and anxiety-provoking.

The same technology that simplifies life by providing more functions in each device also complicates life by making the device harder to learn.

Seven stages of action: one for goals, three for execution, and three for evaluation.

5.  Perceive (the state of the world)

7.  Compare (the outcome with the goal)

For many everyday tasks, goals and intentions are not well specified: they are opportunistic rather than planned. Opportunistic actions are those in which the behavior takes advantage of circumstances.

The most basic level of processing is called visceral. This is sometimes referred to as “the lizard brain.” All people have the same basic visceral responses. These are part of the basic protective mechanisms of the human affective system, making quick judgments about the environment.

The behavioral level is the home of learned skills, triggered by situations that match the appropriate patterns.

Feedback provides reassurance, even when it indicates a negative result. A lack of feedback creates a feeling of lack of control, which can be unsettling.

The highest levels of emotions come from the reflective level, for it is here that causes are assigned and where predictions of the future take place.

If we have a strongly positive visceral response but disappointing usability problems at the behavioral level, when we reflect back upon the product, the reflective level might very well weigh the positive response strongly enough to overlook the severe behavioral difficulties (hence the phrase, “Attractive things work better”).

•  Do not blame people when they fail to use your products properly.

•  Take people’s difficulties as signifiers of where the product can be improved.

•  Eliminate all error messages from electronic or computer systems. Instead, provide help and guidance.

2.  What are the alternative action sequences?

7.  Is this okay? Have I accomplished my goal?

Anyone using a product should always be able to determine the answers to all seven questions. This puts the burden on the designer to ensure that at each stage, the product provides the information required to answer the question.

The next time you can’t immediately figure out the shower control in a hotel room or have trouble using an unfamiliar television set or kitchen appliance, remember that the problem is in the design. Ask yourself where the problem lies. At which of the seven stages of action does it fail? Which design principles are deficient?

Behavior is determined by combining the knowledge in the head with that in the world.

The most effective way of helping people remember is to make it unnecessary.

With a bad mapping, however, a burden is placed upon memory, leading to more mental effort and a higher chance of error.

This is called the legacy problem, and it will come up several times in this book. Too many devices use the existing standard—that is the legacy.

Conventions are a special kind of cultural constraint.

Skeuomorphic is the technical term for incorporating old, familiar ideas into new technologies, even though they no longer play a functional role.

The “Five Whys,” originally developed by Sakichi Toyoda and used by the Toyota Motor Company as part of the Toyota Production System for improving quality.

Mistakes are errors in setting the goal or plan, and in comparing results with expectations—the higher levels of cognition. Slips happen in the execution of a plan, or in the perception or interpretation of the outcome—the lower stages.

There are several ways to combat memory-lapse errors. One is to minimize the number of steps; another, to provide vivid reminders of steps that need to be completed. A superior method is to use the forcing function of Chapter 4. For example, automated teller machines often require removal of the bank card before delivering the requested money.

Retrieval from long-term memory is actually a reconstruction rather than an accurate record.

Electronic systems have a wide range of methods that could be used to reduce error. One is to segregate controls, so that easily confused controls are located far from one another.

Another is to use separate modules, so that any control not directly relevant to the current operation is not visible on the screen, but requires extra effort to get to.

•  Reduce the number of holes (or make the existing holes smaller).

•  Alert the human operators when several holes have lined up.

Resilience engineering, with the goal of designing systems, procedures, management, and the training of people so they are able to respond to problems as they arise.

Designers resist the temptation to jump immediately to a solution for the stated problem. Instead, they first spend time determining what basic, fundamental (root) issue needs to be addressed.

They don’t try to search for a solution until they have determined the real problem, and even then, instead of solving that problem, they stop to consider a wide range of potential solutions. Only then will they finally converge upon their proposal. This process is called design thinking.

The Double-Diamond Model of Design:

4.  Testing These four activities are iterated; that is, they are repeated over and over, with each cycle yielding more insights and getting closer to the desired solution.

Once the problem has been defined, finding an appropriate solution again requires deep understanding of the intended population, how those people perform their activities, their capabilities and prior experience, and what cultural issues might be impacted.

Focusing upon tasks is too limiting. Apple’s success with its music player, the iPod, was because Apple supported the entire activity involved in listening to music: discovering it, purchasing it, getting it into the music player, developing playlists (that could be shared), and listening to the music.

Both worlds: iterative experimentation to refine the problem and the solution, coupled with management reviews at the gates.

Designers try hard to determine people’s real needs and to fulfill them, whereas marketing is concerned with determining what people will actually buy.

Years ago, a cane was fashionable: people who didn’t need them would use them anyway,

Complexity is essential: it is confusion that is undesirable.

In her book Different, Harvard professor Youngme Moon argues that it is this attempt to match the competition that causes all products to be the same.

Most companies compare features with their competition to determine where they are weak, so they can strengthen those areas. Wrong, argues Moon. A better strategy is to concentrate on areas where they are stronger and to strengthen them even more. Then focus all marketing and advertisements to point out the strong points.

fast to be invented, slow to be accepted, even slower to fade away and die.

The world of product design offers many examples of Stigler’s law. Products are thought to be the invention of the company that most successfully capitalized upon the idea, not the company that originated it.

A rule of thumb is twenty years from first demonstrations in research laboratories to commercial product, and then a decade or two from first commercial release to widespread adoption.

Plato tells us that Socrates complained about the impact of books, arguing that reliance on written material would diminish not only memory but the very need to think, to debate, to learn through discussion.

The design must be thought of as a total experience.

How I'm Going to Compete With Calm & HeadSpace