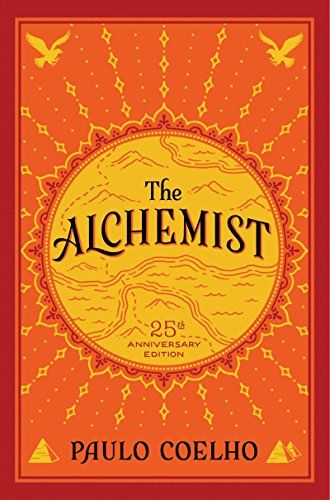 What makes this story different than many fiction books is the way the Coelho is able to intertwine such deep wisdom and philosophy into the story. There are so many themes that can be applied to problems people face on a daily basis. It was also a very fun read, and it had me rooting for the main character. This book is definitely worth reading multiple times and can teach you a thing or two on the way.

The Alchemist tells the story of a young shepherd on a quest to fulfill his Personal Legend. The protagonist faces many trials and tribulations throughout his journey and meets many friends, mentors, and enemies along the way.

"That at a certain point in our lives, we lost control of what's happening to us, and our lives become controlled by fate, That's the world's greatest lie."

"Everyone seems to have a clear idea of how other people should lead their lives, but none about his or her own."

"He never realized that people are capable, at any time in their lives, of doing what they dream of."

"and when each day is the same as the next, it's because people fail to recognize the good things that happen in their lives everyday that the sun rises.

“This wasn’t a strange place; it was a new one.”

“As he mused about these things, he realized that he had to choose between thinking of himself as the poor victim of a thief and as an adventurer in quest of his treasure.”

"You must understand that love never keeps a man from pursuing his Personal Legend."

"Men dream more about coming home than about leaving..If what one finds is made of pure matter, it will never spoil."

"There is only way to learn, the alchemist answered. It's through action."

"Happiness could be found in a grain of sand from the desert, as the alchemist has said. Because a grain of sand is a moment of creation, and the universe has taken millions of years to create it."

"One dies of thirst just when the palm trees have appeared on the horizon."

"It is said that the darkest hour of the night came just before the dawn."

"There is only one thing that makes a dream impossible to achieve: the fear of failure."

It's only those who are persistent, and willing to study things deeply, who will achieve the Master Work."

"When we strive to become better than we are, everything around us becomes better, too."

"No matter what he does, every person on earth plays a central role in the history of the world. And normally he doesn't know it."

"On the way toward realizing his own Personal Legend, he had learned all he needed to know, and had experienced everything he might have dreamed of."

"It's true; life really is generous to those who pursue their Personal Legend, the boy thought.